HomeBlogWhat are the Functions of a Knockout Drum

The Knockout Drum’s function is to remove oil and liquids from flare gases. It is part of the flare header system, which is the main component in petroleum and natural gas refineries. Usually, in these plants, the gases that are released contain certain amounts of oil and water that can turn hazardous for the environment. The flare system works to safely remove these gaseous wastes from the processing setup by burning the gas first without releasing it into the atmosphere. By this system, the hydrocarbon gases that are generally produced in an industrial plant setup are not directly released but converted to carbon dioxide and water vapor, thus making this component a champion for the environment.

Why is it Essential to have a Knockout Drum

Removal of liquids and oil from flare gases is the main function of a knockout drum. This is necessary mainly because:

Called by names such as mist eliminators, scrubber separators, vane pack separators, demister pad separators, inertial separators, the knock-out drum functions as one of the main components in a refinery and is made available in horizontal and vertical configurations.

The operating parameters and most importantly, the space available determines the design choice of the knockout drum. When the flowrate is high and the need for storage of liquid is more, there is a use for the horizontal knockout drum.

The following are some of the advantages of a horizontal knock-out drum:

This design works best when there is not enough space to place a knockout drum and the liquid load is low. The designs that can be implemented are as follows:

This is a combination of both horizontal and vertical knockout drums. At the base of the flare, system is the vertical drum and further upstream is the horizontal drum. This kind of combination drum helps handle large gas volumes and is very effective at removing gas and oil in the flaring system.

If you manage natural gas, oil or petroleum refinery units, it is vital to capitalize on a good knockout drum for your flaring processes. The use of a knockout drum is also to maintain the safety of the unit and people. As part of separators and filters, Sungov Engineering offers customized horizontal and vertical knockout drums. If you are unsure about which knockout drum works for your processes, call us to understand how we can help you better. 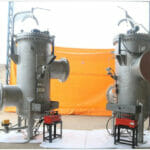 Previous:
Industrial Self-Cleaning Strainer and What You Need to Know About It 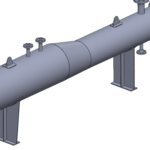 Next:
Pig Launcher and Receiver Manufacturers: Expectations Vs Reality

Dive into the World of Quick Opening Closure Manufacturers 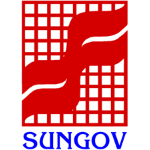