The Type of Knock-Out Drums Used in Refineries

The Importance of a Knock-Out Drum

The vessel in a refinery that is intended to separate and collect the condensed liquid from process gases and to remove it is called a knockout drum. Called by other names such as mist eliminators, scrubber separators, vane pack separators, demister pad separators, inertial separators, the knock-out drum functions as one of the main components in a refinery and is made available in horizontal and vertical configurations.

What are the Functions of a Knock-Out Drum

The knock-out drum’s applications are listed as follows:

What You Need to Know About Horizontal Configuration

The design of a knock-out drum is generally decided based on the space available and the operating parameters. A horizontal drum is used when the flow rate is high and there is a need for enormous liquid storage capacity. Some of the advantages of having a horizontal knock-out drum are:

The design of the knockout drum is determined by the path in which the vapor enters and exits the drum. Some of the popular horizontal configurations are as below:

What You Need to Know About Vertical Configuration

What is Common Between the Knock-out Drums

With over three decades of experience, we at Sungov Engineering are always brimming with ideas and experience to assist you in your project involving vessel fabrication. Sungov Engineering manufactures knockout drums for several applications including natural gas, flare gas, and other fuel gas. The drums are generally constructed to ASME Sec VIII Div. 1 Code of construction with/without ASME stamping.

Our team of experts who are always passionate about what they do will gladly discuss your process and assist you with your questions. Call us today! 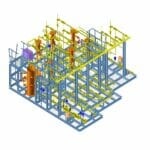 Previous:
Everything You Need to Know About Gas Conditioning Equipment 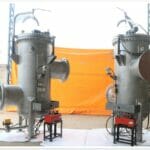 Next:
How Does Industrial Self-Cleaning Water Filtration Systems Work?

The Type of Knock-Out Drums Used in Refineries

Everything You Need to Know About Gas Conditioning Equipment